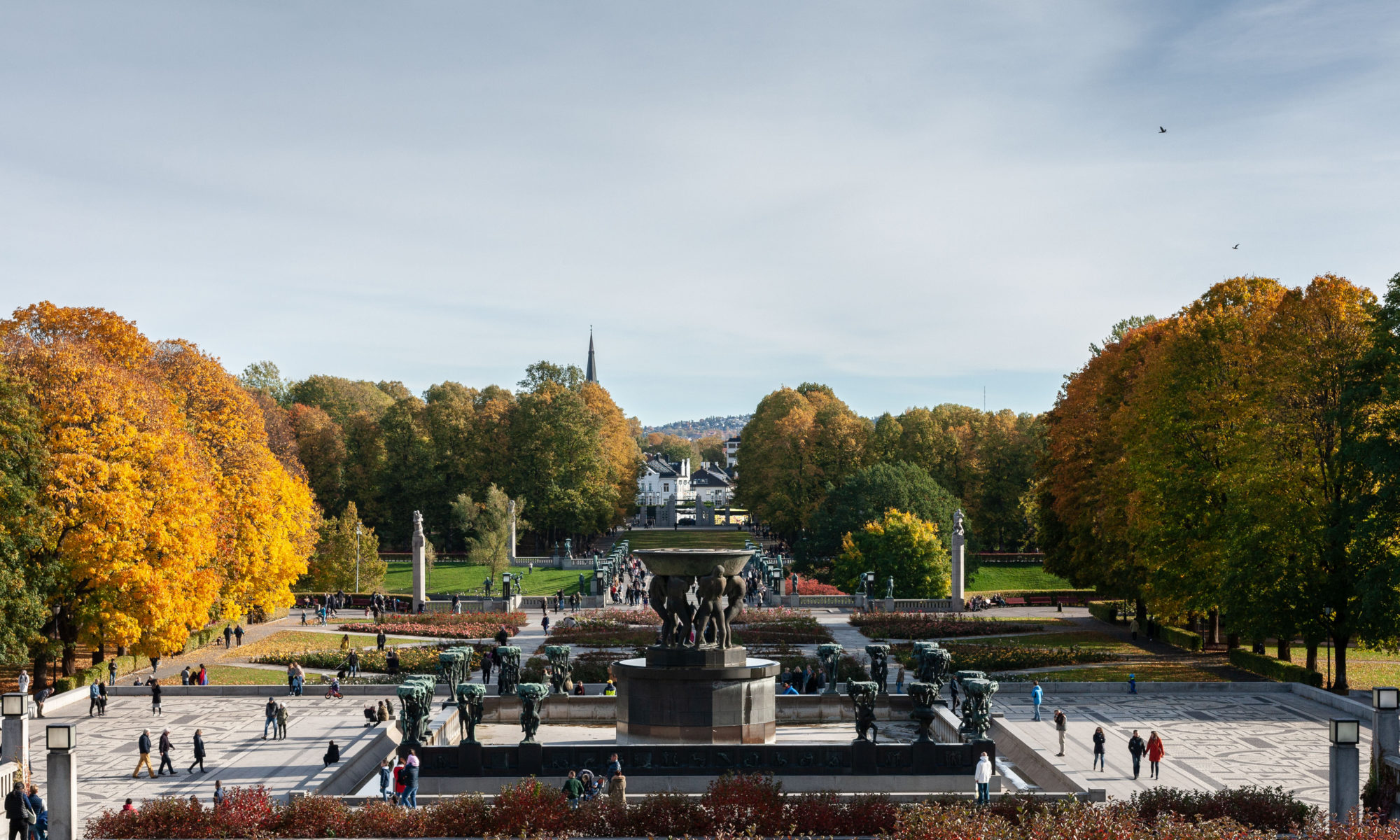 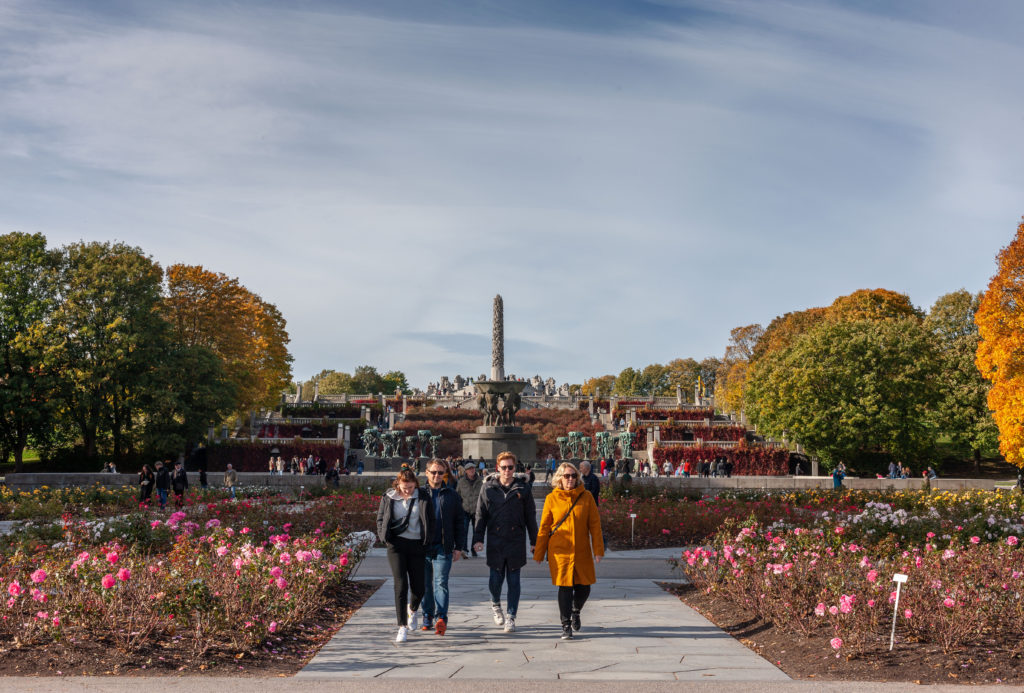 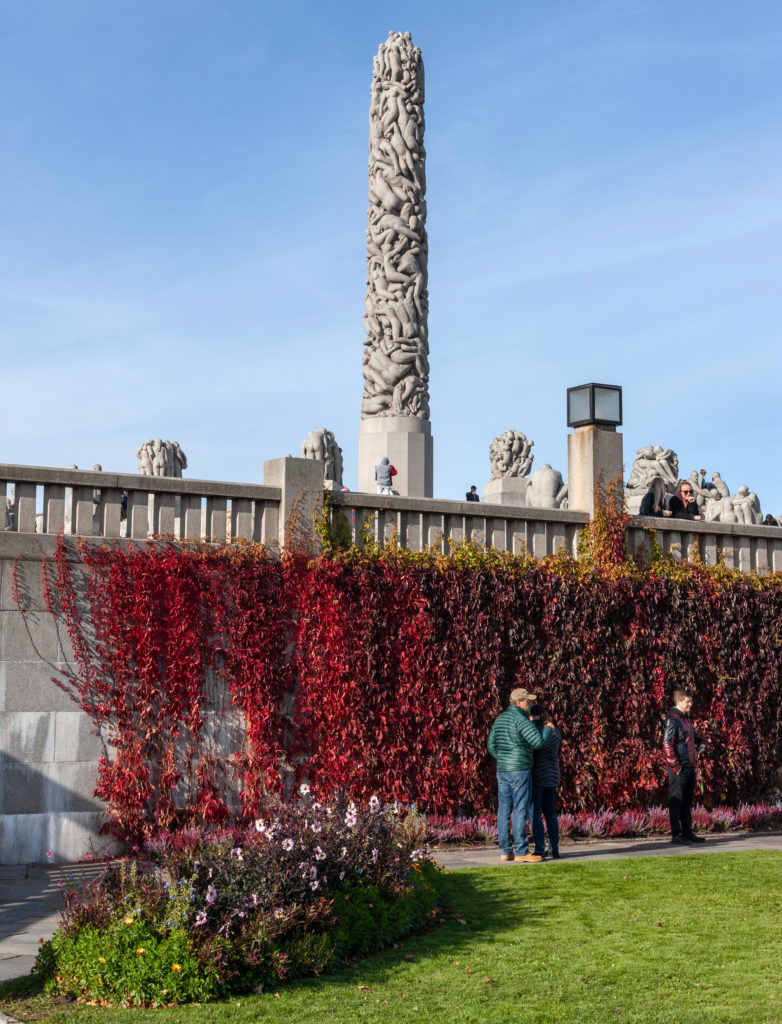 The park of Frogner Manor was historically smaller and centered on the manor house, and was landscaped as a baroque park in the 18th century by its owner, the noted military officer Hans Jacob Scheel. It was landscaped as a romantic park in the 19th century by then-owner, German-born industrialist Benjamin Wegner. Large parts of the estate were sold to give room for city expansion in the 19th century, and the remaining estate was bought by Christiania municipality in 1896 and made into a public park. It was the site of the 1914 Jubilee Exhibition, and Vigeland’s sculpture arrangement was constructed from the 1920s. In addition to the sculpture park, the manor house and a nearby pavilion, the park also contains Frognerbadet (the Frogner Baths) and Frogner Stadium. The Frogner Pond is found in the centre of the park. 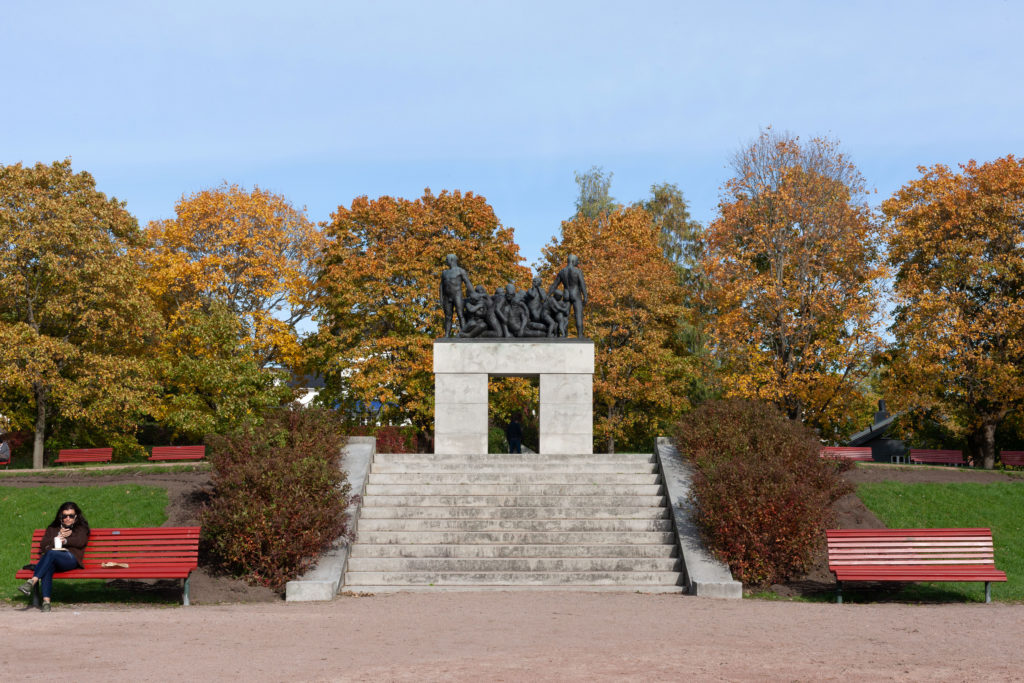 Frogner Park is the largest park in the city and covers 45 hectares; the sculpture installation is the world’s largest sculpture park made by a single artist. Frogner Park is the most popular tourist attraction of Norway, with between 1 and 2 million visitors each year, and is open to the public at all times. Frogner Park and the Vigeland installation (Norwegian: Frognerparken og Vigelandsanlegget) was protected under the Heritage Act on 13 February 2009 as the first park in Norway. 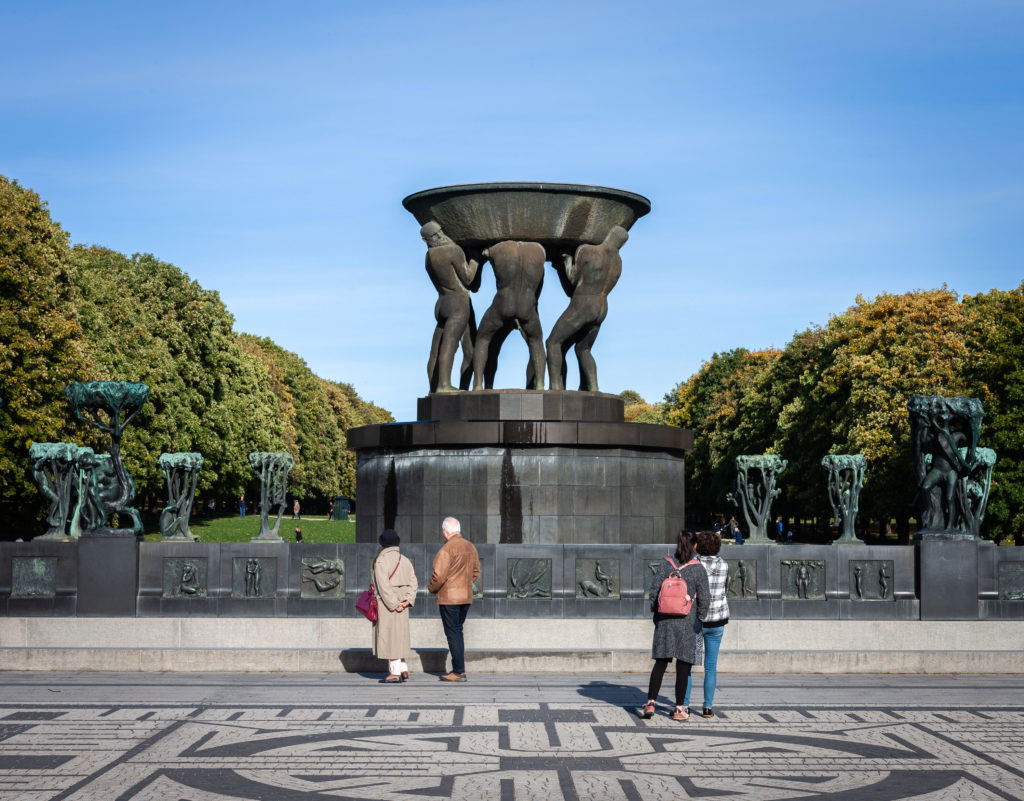 The Vigeland installation (Norwegian: Vigelandsanlegget), originally called the Tørtberg installation, is located in the present centre of Frogner Park. It is the name of the arrangement of sculptures and not of an area as such, as the entire park is called Frogner Park. 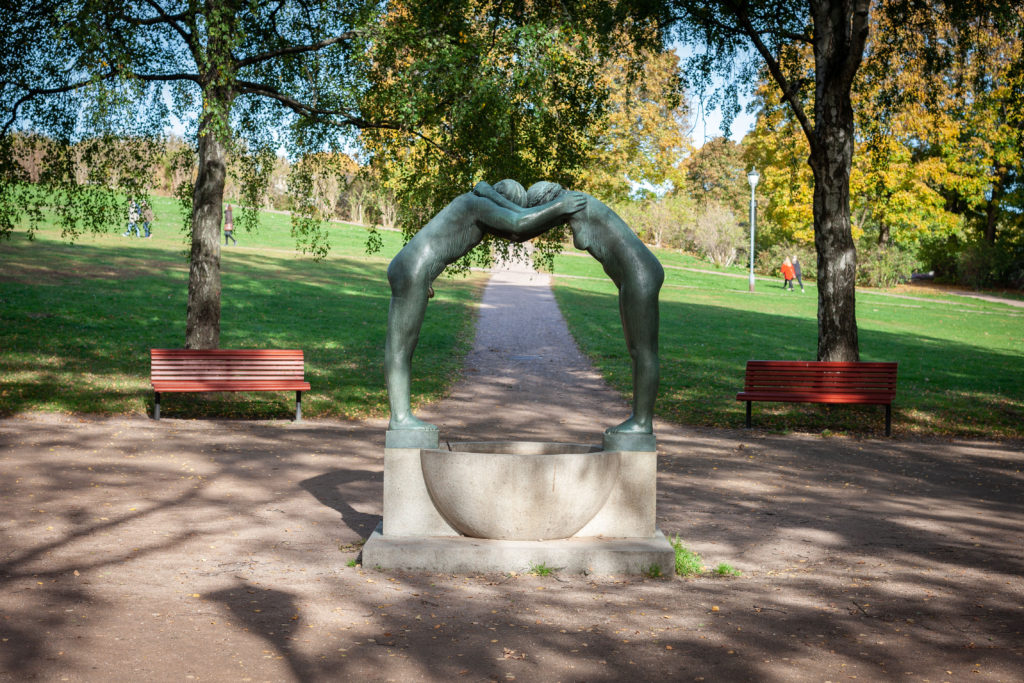 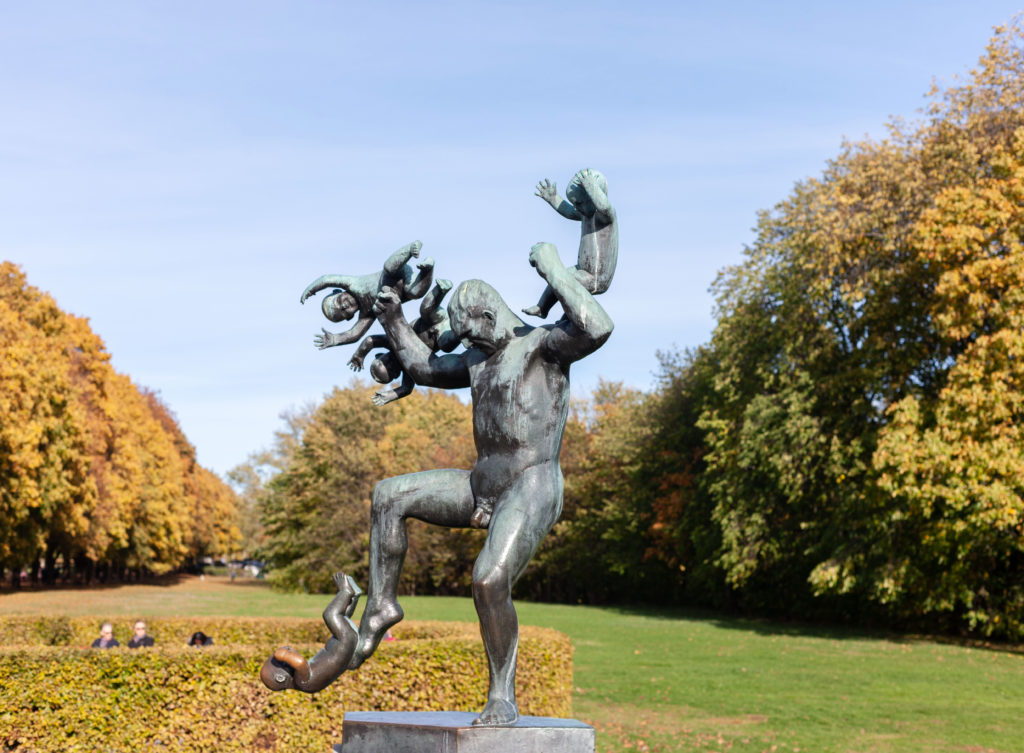 The sculpture area in Frogner Park covers 80 acres (320,000 m2) and features 212 bronze and granite sculptures, all designed by Gustav Vigeland. The Bridge was the first part to be opened to the public, in 1940. The Bridge forms a 100 metre (328 ft)-long, 15 metre (49 ft)-wide connection between the Main Gate and the Fountain, lined with 58 sculptures, including one of the park’s more popular statues, 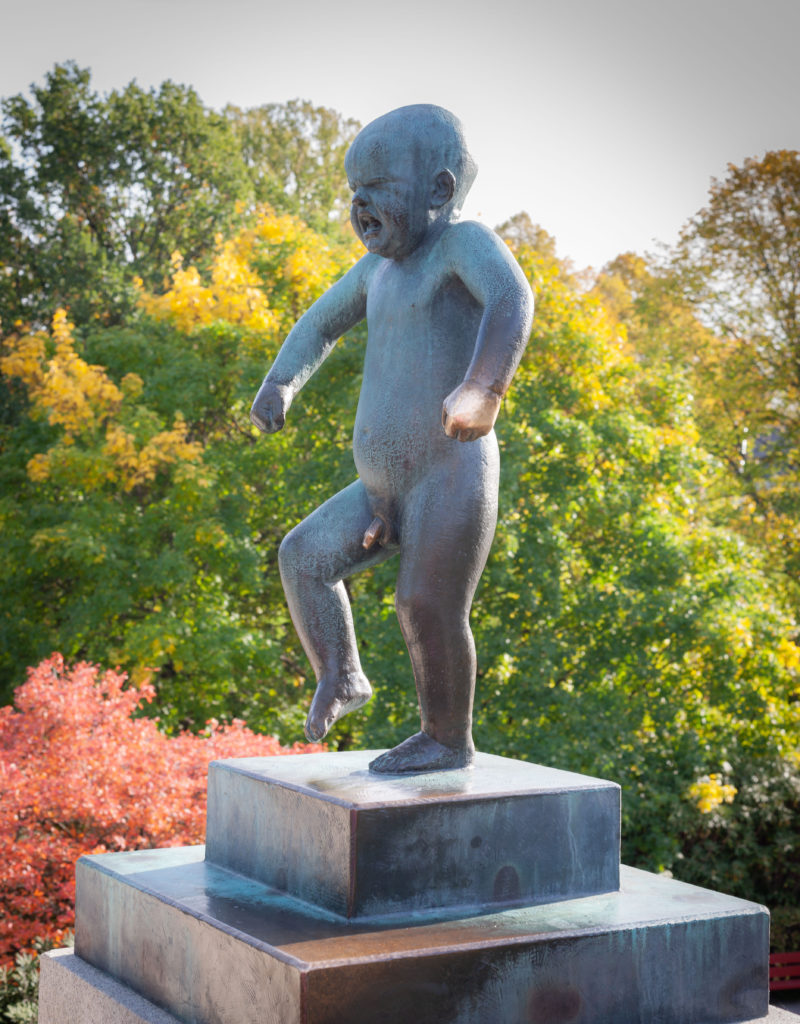 Angry Boy (Sinnataggen). Visitors could enjoy the sculptures while most of the park was still under construction. At the end of the bridge lies the Children’s Playground, a collection of eight bronze statues showing children at play. 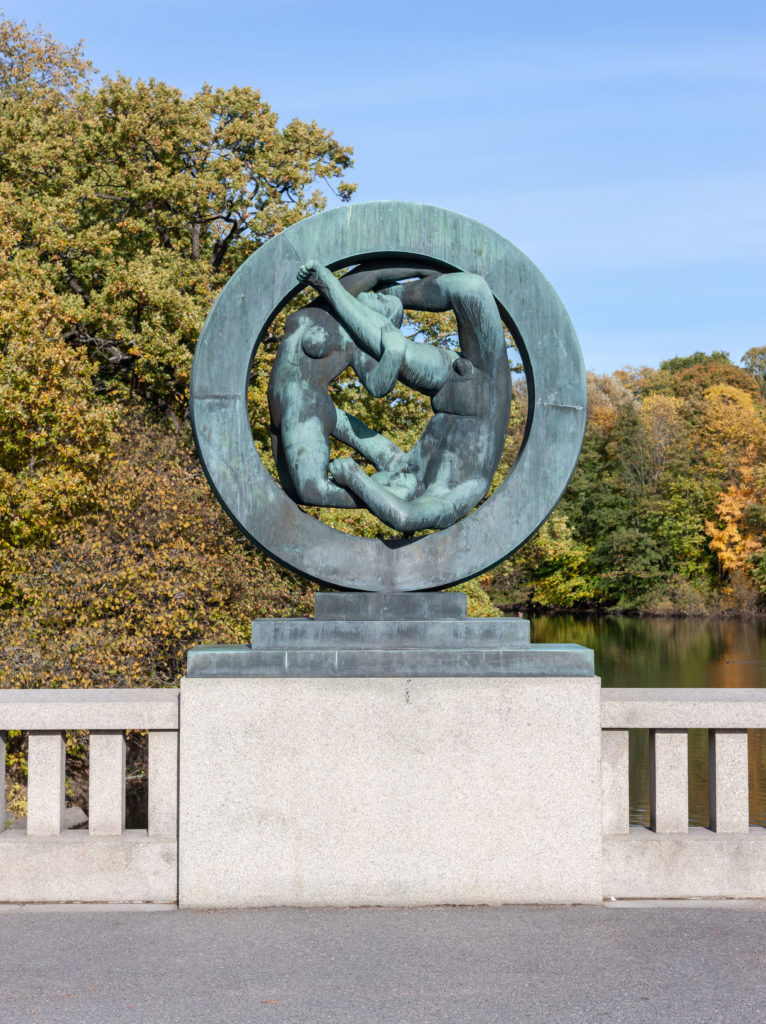